The Parker Pen Company is a manufacturer of pens, founded in 1888 by George Safford Parker in Janesville, Wisconsin, United States. 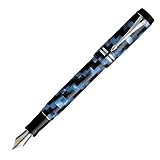 George S Parker, the founder, had previously been a sales agent for the John Holland Gold Pen Company. He received his first fountain pen related patent in 1889. In 1894 Parker received a patent on his “Lucky Curve” feed, which was claimed to draw excess ink back into the pen body when the pen was not in use. The Lucky Curve feed was used in various forms until 1928.

From the 1920s to the 1960s, before the development of the ballpoint pen, Parker was either number one or number two in worldwide writing instrument sales. In 1931 Parker created Quink “quick drying ink” which eliminated the need for blotting and led to the development of the most widely used model of fountain pen in history (over $400 million worth of sales in its 30 year history) the Parker 51. Manufacturing facilities were set up over the years in Canada, United Kingdom, Denmark, France, Mexico, USA, Pakistan, India and Argentina. Parker pens were frequently selected (often as favorite pens of the signers) to sign important documents such as the World War II armistices, and commemorative editions were sometimes offered.

The company bought retailer and catalog company Norm Thompson in 1973, and then sold it off in 1981.[2] In 1976 Parker acquired Manpower just as the temporary staffing market was surging. In time Manpower provided more revenue than the pen business. A 1982 spinoff, Sintered Specialties, Inc., became SSI Technologies, a manufacturer of automotive sensors.

A management buyout in 1987 moved the company headquarters to Newhaven, East Sussex, England which was the original location of the Valentine Pen Company previously acquired by Parker. In 1993 Parker was acquired by the Gillette Company, which already owned the PaperMate brand, one of the best-selling disposable ballpoints. Gillette sold the writing instruments division in 2000 to Newell Rubbermaid, whose own Stationery Division, Sanford, became the largest in the world owning such brand names as Rotring, Sharpie, Reynolds as well as Parker, PaperMate, Waterman and Liquid Paper.

In July of 2009 the 180 workers at Parker Newhaven, UK, got notice that the factory was to be shut down and the production moved to France.

On August 18, 2009 Newell Rubbermaid Inc. announced that Janesville Wisconsin will lose the remaining operations tied to Parker Pen and 153 jobs. “This decision is a response to structural issues accelerated by market trends and is in no way a reflection on the highly valued work performed by our Janesville employees over the years,” the company said. Newell Rubbermaid said it will offer transitional employment services as well as severance benefits.

The original full-sized Duofold was soon joined by the smaller Duofold Junior, Duofold Special, and Lady Duofold. While the Junior and special could also be fitted with Parker s Washer Clip, the Lady Duofold was available with a Chatelaine, or Ring Top for hanging around one’s neck. The Ring Top would also appear on Parker’s Vest Pocket models, for being attached to a watch fob. Matching pencils would come with either clip or ring, depending on the pen selected. The pen was available only in black and red hard rubber until 1926, when Parker introduced the “unbreakable Permanite” Duofold (Permanite was Parker’s trade name for a plastic manufactured by DuPont). The first new color was the traditional red, followed by Jade green color made to compete with Sheaffer’s revolutionary Jade Radite Lifetime pens which was not originally referred to as a Duofold, but rather the Black Tipped Jade (changed shortly thereafter). This was followed by Lapis Lazuli blue and Mandarin Yellow. In 1928, Moderne black and pearl (black lined pearl) was introduced as a Deluxe model and Parker signified this by the addition of a third cap ring to the cap band instead of the usual two found at the time. In 1930 the Duofold line was streamlined with tapered ends replacing the familiar “flat-top” style. Additional colors were introduced: burgundy (red and black pearl); Moderne green and pearl (green lined pearl); and finally, green and black pearl (black lined green pearl).

But by the early 1930’s the Duofold’s design had grown dated. Parker launched its replacement, the Parker Vacumatic in 1933, and the Duofold line was moved to second tier, even though it followed closely in the Vacumatic’s design with slimmer profile, streamlined look and vacumatic filling mechanism. Duofolds remained popular in Europe being produced well into the 60s in varying sizes and colors when it was revived in the 80’s once again as Parker’s flagship model. In 1988 (to celebrate the 100th anniversary), Parker launched the Duofold Centennial series of Pens (Fountain Pens, Rollerballs and Pencils). Later, they introduced the Duofold International line with models that also successfully evoked the classic Duofold design though smaller than the Centennial. There are also differences in the ink feeding systems, changing from their Button Filling mechanism to a more modern Cartridge/ Convertor system. The modern Duofold is a key part of Parker’s product portfolio, and the original “Big Red” is the cornerstone of a vintage pen collection.