Cadbury Milk Tray is a selection of milk chocolates with various fillings produced in the United Kingdom by Cadbury UK. Launched by the Cadbury company in 1915, it is one of the longest running brands in the confectioner’s portfolio. 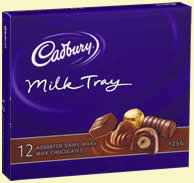 Milk Tray was responsible for one of the most famous and iconic advertising campaigns in British television history. Running from 1968 to 2003, the chocolate was then advertised by the Milk Tray Man a rough, tough James Bond -style action man who goes through hell and high water to surreptitiously deliver a box of Milk Tray chocolates to a woman. The original strapline was All because the lady loves Milk Tray.

There were 19 adverts in the series.

Six actors played the Milk Tray Man. Actor Gary Myers, who is most recognizable as the action figure, starred in 11 of them between 1968 and 1984. James Coombes assumed the role in 1987. Kidderminster born actor Alan Riley was officially the last Milk Tray man.

The music, The Night Rider, is written by Cliff Adams, who also wrote the music for Fry’s Turkish Delight advertisements. The music was performed by Alan Hawkshaw.